What is a Boiling Water Tap? 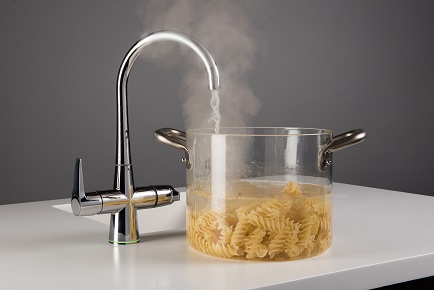 A boiling water tap delivers instant hot water whenever you need it – perfect for hot drinks, with no more need for a kettle in your life.

While some instant hot water taps take the water temperature right up to 100C, most are delivered at a 98º-99ºC. Others also offer a filtered cold water function. So it is important to understand the variations available and specify which combination you require before ordering.

However, adding a hot water tap doesn’t mean having to add a second tap to your kitchen sink. Here are the types of boiling water tap you could consider replacing your regular kitchen tap with:

How does the hot water tap work?

Boiling water taps have a small thermal-insulted tank which needs to be stored nearby, as it keeps the water it uses in its own hot tank. By pressing the handle, near boiling hot water is released through the tap and cool tap water flows into the tank to replace what is used.

Benefit of an instant boiling tap:

Boiling water taps will need to be permanently plumbed in alongside your usual kitchen sink taps.

Boiling water taps require space for an additional water tank, which is often stored underneath the worktop nearest your tap, as well needing a water supply and three-pin plug in close proximity.

There are a variety of tank capacities, from 2 litres to 11 litres. The required capacity will be dependent on the amount of boiling water that is typically needed at once by the user – but smaller capacity tanks are usually adequate for in the home and take up less room beneath the sink.

A filter will also need to be included in a hot water tap, which will need replacing every 6 months to 5 years, dependant on the brand and tank capacity, in order to help prevent limescale.

Manufacturers recommend you change the filter every six to 12 months and in some cases can invalidate the warranty if you do not. A descaling solution, to clean the inside of the tank, is also recommended by some manufacturers.

The boiling water tap however, can be cleaned like any other kitchen tap.

Here at City Plumbing we offer a wide range of instant hot water taps. You can explore our range online or visit your local branch