Energy price rises in the UK are causing ‘heating arguments’ 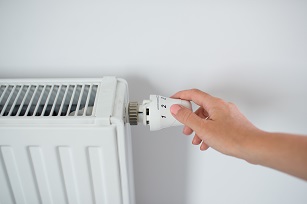 Energy regulator Ofgem’s announcement in February 2022 that the energy price cap was set to rise by hundreds of pounds a year from April 2022 onwards, led to a panic over household spending, and ever since, people in the UK have been pondering how they can reduce their bill costs.

Whether it be cutting down on how often we turn on the heating, or having our boilers serviced to ensure they are working efficiently; it’s only understandable that many households are looking into ways to cut their expenditure on gas and electricity.

With that in mind, we decided to investigate how the price rise is making people feel and if it is altering the nation’s energy usage habits. We conducted a survey of 2,000 people to find out more.

Some have stopped using heating altogether 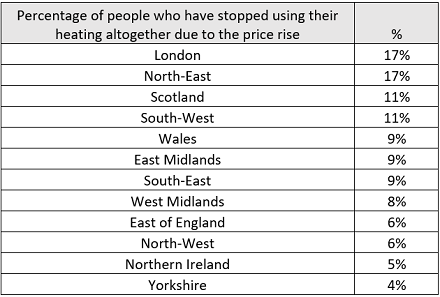 Our survey findings appear to show that Brits are taking the energy price crisis very seriously, with a third of respondents (36%) admitting that they have cut back on how often they heat their homes already this year due to the prospect of rising energy prices.

In fact, one in ten people (10%) have turned off their heating for good.

Residents in Yorkshire are the opposite, with just 4% of those surveyed saying that they have turned their heating off this year.

In fact, almost one in five respondents in Yorkshire (17%) have not changed their energy usage habits at all. Again, this is a higher rate than any other region in the country.

Anxiety around energy usage is causing ‘heating arguments’ according to the study, with four out of five people surveyed (78%) saying that they get annoyed by people in their household meddling with the thermostat.

Almost two thirds of Brits (60%) report getting annoyed with someone in their household for their home energy use, a figure that rises to 86% among 18-24-year-olds.

When it comes to ‘home energy arguments’, leaving lights on (49%) leads the way as the most likely cause.

The cost of a few degrees

Analysis of the latest Department for Business, Energy & Industrial Strategy data alongside the new energy cap prices highlights that arguments could rise even further once the impact of the price rises are seen in energy bills.

UK energy bills are predicted to see an average 48% increase in price, meaning that those who continue to keep their heating up will be seeing a larger financial impact for each degree higher they turn their thermostat.

To heat a single room to 18 degrees will cost the average household £5.35 per day once the new energy cap prices come into use, jumping to £10.71 by turning it up only one degree to 19 degrees. Those looking to heat their households up further will see even greater increases, with people looking to enjoy temperatures of 25 degrees required to pay an average of £42.84.

Price rises will vary by region 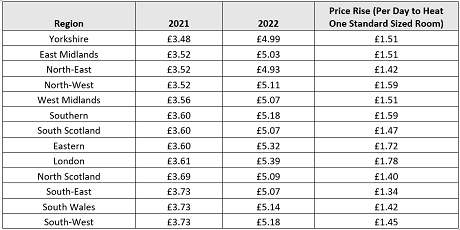 Department for Business, Energy & Industrial Strategy data suggests that the average (p/kWh) varies depending on the region a person lives in.

We analysed the data for each region to see both the 2021 prices and the new price from April 2022. We looked at how much it would cost to heat one standard sized room for a full day, using 18 degrees as a benchmark (the WHO recommended room temperature).

Those who receive their energy in London will see the biggest price rise, a climb of £1.78 per day to cost £5.39 to heat a standard room to 18 degrees.

Strangely, nearby consumers in the South-East will see the smallest rise of £1.34 to pay £5.07 for the same service.

We analysed search trend data of the energy price crisis by measuring the number of Google searches for related phrases like ‘energy costs’ and ‘energy bills’.

We found that searches for ‘energy costs’ peaked at a five year high in the lead-up to Ofgem’s announcement of a raised energy price cap in February 2022.

12,000 searches represented a massive 166% increase on the highest month of search traffic prior to 2021.

It was a similar story when we analysed searches for the phrase ‘energy bills’.

For all of our latest heating products, check out our heating category page for more.

We surveyed 2,000 UK adults in March 2022 on their energy usage habits and opinions.

We sourced Department for Business, Energy, and Industrial Strategy data for the regional heating costs.

Time to heat room with power of source as variable 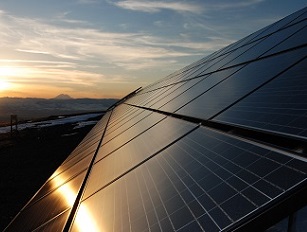 How to become a renewable energy engineer

As homeowners and businesses make a move towards renewable sources, we want to help you make the transition to becoming an accredited renewable energy engineer. 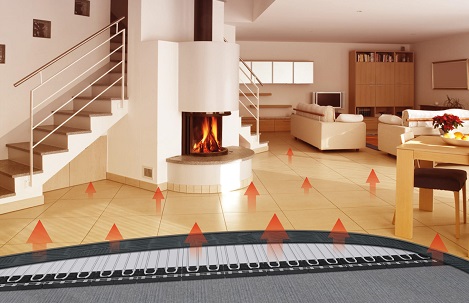 Electric and water are the key types of underfloor heating, and their cost, installation, and project suitability vary. Read the key differences below to give you full confidence when talking to customers. 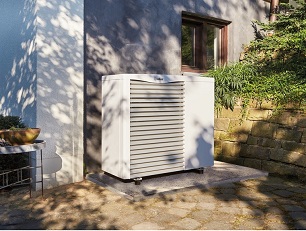 Everything you need to know about the Green Homes Grant

The Green Homes Grant is an incentive-based scheme in which the government will pay up to two-thirds of energy saving home improvements up to £5,000